The A350 – brand new and sleek – is returning to Melbourne for a limited time.

Review your recent flights on our tool at www.flightmaestro.net

The A350 – brand new, sleek and just downright gorgeous – is returning to Melbourne for a limited time this summer.

From 1st May 2017 to 28th June 2017, SQ217, departing Singapore at 10:45 and arriving in Melbourne 20:10, and the return leg, SQ218 departing Melbourne at 00:05 and arriving in Singapore 06:00, will be operated by the popular and futuristic Airbus A350. Albeit a temporary and most likely seasonal rostering, it is a fantastic opportunity for those in Melbourne to experience the next best thing in aviation.

Interestingly, the swap out was for an A380 and not the B777-200/ER (B772) like last time. Quite the gauge change, and rather unfortunate for Melbournians as SQ’s B772s are desperately showing their age (and one aircraft I’d rather see the back of).

Singapore Airlines operates the A350 in a three-class layout, split between 42 Business Class (in a 1-2-1 layout), 24 Premium Economy (in a 2-4-2 layout – a bit on the cramped side given this layout is also used on the wider B777-300ER), and 187 Economy Class (in a 3-3-3 layout). Each of the classes are represented by Singapore’s latest iterations of their newest seats (a boast also shared with SQ’s B777-300ER family). Setting itself apart, however, is the integration of SQ’s new “buddy” app, which allows for integration of the passenger’s smartphone with their seat-back entertainment, allowing for messaging and preselection of entertainment. 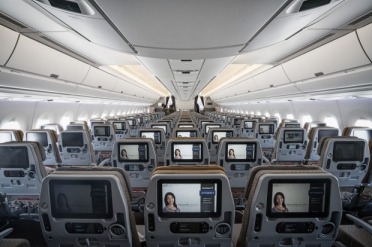 Singapore has remained coy regarding any plans to permanently roster the auspicious A350, its newest member of the fleet, on the SIN-MEL route. Singapore has a number of B787-10s on order also (deliveries are slated to begin in 2018), for which I suspect SIN-MEL will also be a candidate route.

Tom is a consultant and founder of FlightMaestro.net, the online travel tool that rates, ranks and dissects every facet of in-flight passenger experience. All views expressed are his own.